A trio of medical students at the Wayne State University School of Medicine took the lead in discovering what factors predicted if a patient would show up for an Ophthalmology appointment at the Kresge Eye Institute and its affiliated locations throughout the state of Michigan. 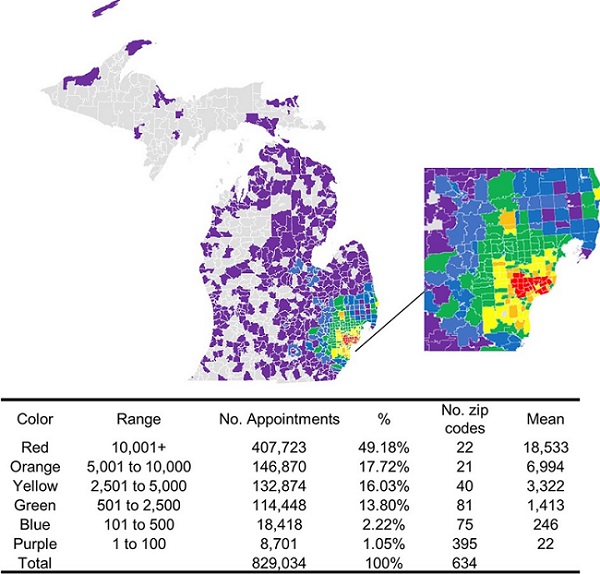 They found a cumulative 79.16% appointment compliance in 597,364 appointments. Patients who were older and female tended to have greater compliance rates compared to younger and male patients. African Americans represented the highest frequency of non-compliance in appointment attendance. “This finding suggests the impact of potential socioeconomic characteristics that prompt further investigation in the near future,” said Khambati, a third-year medical student and the study’s lead author.

Comprehensive Analysis to Uncover Determinants of Patient Appointment Compliance in Ophthalmology at the Kresge Eye Institute, USA was published in Patient Preference and Adherence, a journal that focuses on the growing importance of patient preference and adherence throughout the therapeutic continuum.

The metropolitan Detroit area encompasses about 49% of appointments, representing the primary residence for a large group of KEI’s diverse patient pool. While KEI’s Detroit location had a higher proportion of non-compliant appointments, those insured by Medicare primary insurance had higher appointment compliance. Weather played a role when the team investigated the impact of the appointment month. February and December had significantly higher odds of compliance compared to January.

“This was the first study to analyze larger data. Now that we have data set, remaining questions will be addressed in future studies,” Dr. Kumar said.

The analysis looked at the factors affecting compliance, rather than the causality, theorizing why African Americans were the most non-compliant group by referencing academic literature. One paper using data from http://www.city-data.com/city/ demonstrated that 83% of the Detroit population was African American and had a median household income of $30,344, a stark contrast to a suburb like West Bloomfield, in which 79% of the population is Caucasian and the median household income was $114,711 in 2017, Khambati said.

“We used this reference in our discussion to better explain potential socioeconomic factors in the differences across income that could have resulted with African Americans being the most non-compliant racial group,” she added. “Additionally, more patient-specific characteristics such as employment status, education, household income, history of mental illness, non-ophthalmologic comorbidities and primary method of transportation were hypothesized that could, perhaps, contribute to noncompliance. These characteristics were mentioned as potential studies that can be investigated in the future.”

To address non-compliance, Khambati said, many other studies have researched strategies such as phone call reminders, emails and text reminders, so the focus of this study was to investigate underlying factors affecting appointment compliance.

The team was supported by mentorship from Dr. Kumar, Dr. Juzych and President Wilson, “who sought to understand the impact of patient and appointment characteristics on appointment compliance to better overall patient care,” Khambati said.

The preliminary findings were presented at the annual meeting of the Association of Research in Vision and Ophthalmology.